Who is following Generation Y? Gen Z of Course

I recently attended the Society for Industrial and

in San Diego and one of my colleagues, Lydia

Cillié-Schmidt, attended the American Society for

(ASTD) annual conference in Denver. As your

strategic business partners we believe that we should

be up-to-date with the latest research and trends to

ensure that we provide you with the best solutions.

One of the main trends we picked up at the ASTD

Conference is the desire to do more with less.

and yet they have to sustain and thrive in future.

In this edition we will give you some more feedback on

the trends and issues we have identified at

these two conferences. We also provide a little more

We know that you also have the challenge of doing

more with less and will assist you gladly in getting 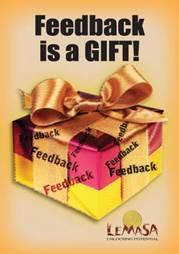 Who is following Generation Y? Gen Z of Course

There is still not one commonly accepted term, and according to the USA Today newspaper, there is still a competition to see who will get to coin the mutually accepted term for the generation who is starting to enter adulthood as from this year. However, this generation warrants a closer look. Generation Z (also known as Generation M (for multitasking), Generation C (for Connected Generation), the Ne t Generation, or the iGeneration) is a common name in the US and other Western nations for the group of people born between 1990 and 2002. This generation is currently growing up in the 2010’s decade, as children and younger teens, and is even according to some citations, entering adulthood as of 2012.

This generation has grown up in an age when computers and the Internet have always existed. In the US, of teens aged 13-18, 93 percent go online on a regular basis and 74 percent have broadband in their home. Over 70 percent of teens own a laptop, 69 percent own a portable MP3 player, and 63 percent own a gaming console. Technology is in the ir DNA, and it shows in the way they live, work and desire products. Generation Zers are a Do-It-Yourself generation. Cutting-edge technology and products that allow Gen Zers to customize to their personal tastes, like the iPhone, which Gen Z can constantly update, design and personalise, are attractive to these young consumers. An example is the explosive growth in the number of Apps available through the Apple App Store and the number of successful businesses that have been launched.

Gen Z is one of the most connected generations. However, connectedness has a dark side, contributing to a sedentary lifestyle and skyrocketing rates of obesity. ; This g eneration may live shorter, less healthy lives than their parents despite the medical advances of the last twenty years. In a time of shrinking family budgets, the cheapest food options remain the unhealthiest and the access to safe and attractive places for physical activity are limited for children living in poverty.

Even as Gen Z members are so highly connected, they also appear to be less inclined toward civic engagement than earlier generations when it comes to voting and to participating in their communities. This could lead to deficiencies in leadership, as fewer people choose to enter into civil service or run for elected office.

Coming into the job market in one of the hardest economic periods in recent memory, young people have been hit especially hard. Research shows that 54 percent of the Millennials in the US, now aged 18-34 want to start their own business rather than work for someone else.

Whether Gen Z enters the workplace as an entrepreneur or an employee, they will bring new traits and expect ations w ith them. Gen Z will favour jobs that have societal benefits, and they will strive to make an impact while maintaining a work-life balance foreign to their parents. They will expect a business culture replete with creative ideas and innovation, and they will demand options to work remotely and with flexible schedules.

Feedback from the American Society for Training and Development’s (ASTD) Annual Conference in Denver, as well as the Society for Industrial and Organisational Psychology’s (SIOP) Annual Conference in San Diego
Some of the trends that we picked up at the ASTD conference at the Exhibition and during the sessions were: • Doing more with less. The economic recession has hit companies in the USA hard and as a result it seems as if they are doing more things in-house. They would, as example, rather train their own trainers with a specific programme, than let external consultants present it all the time. • Apps for everything. There are many downloadable training applications for Smart phones. The Ken Blanchard Company has for example the following free App that you could download on your PC by following these instructions: 1) Open browser and go to https://play.google.com/store/apps 2) Click Search Store 3) Type “How2Lead” and click Enter/return key 4) Install content • Bite size training. There is a trend to shorten the face-to-face component of training. The face-to-face sessions would be limited to a maximum of 90 minutes. Words to describe these sessions are Power Hours, Work-outs, Real-Plays. Even training videos are short – no longer than 12 minutes. • There is a move towards more “portable,” anywhere and on-the-spot training (downloadable on cellphones; ipads; etc.). IBM some years ago used the term “embedded training” where training becomes such a part of the employee’s workday, that they do not even realise that they are busy learning. The mobility of learning interventions supports this notion very well. • Social media is used extensively to engage learners after the training via Twitter, the different Apps, FaceBook, etc. • There is a strong focus on ethics, life balance and sustainability in the training approach and content. • The exploration of the impact of the different generations on learning and training is continuing. • The emphasis is on making informal learning a bit more formal. • The verticality of training was advocated. This means that instead of exposing learners to a variety of learning issues in a given year, organisations focus on one or two important aspects and focus all learning interventions on embedding just those aspects. • There is a movement to redefine coaching as the focus should be on what the person is doing to facilitate learning on an individual basis and not an unproductive debate on whether it is coaching and mentoring. Words like catalyst and producer to replace the word coach are considered. • There is a move towards “We-learning” where the idea is that the context must match intentions. • Women in the workplace are a big issue in the USA as there are more females than men in the workplace since 2010. • There is a major focus on leadership development, specifically in terms of Quiet leadership and servant leadership. Leadership development also focuses on the management of remote/virtual teams and creating a direct link between learning experience and application. The “leader as learner” concept is still high on the agenda. There is also a preference for strengths-based leadership development. • The use of neuro-science in training and development is also gaining ground. The big news at SIOP was that people like Charles Lance, Brian Hoffman and Duncan Jackson openly admitted that the following statement by Sackett and Dreher (1982, p 409) might have directed Assessment Centre researchers and practitioners in the wrong direction: “results provide virtually no support for the view that the assessment centre technique generates dimensional scores that can be interpreted as representing complex constructs .” Sackett and Dreher (1982) based their view on the following findings: § Relatively strong correlations among different dimensions within exercises § Relatively weak correlations among same dimensions across exercises. New perspectives did, however, come to light and these were highlighted during the Symposium titled Dimension, Task, and Mixed-Model Assessment Centers: A Consideration of Three Perspectives by Duncan JR Jackson (the University of Seoul and ASSESTA Co Ltd) and Brian J Hoffman (the University of Georgia). The following insights were shared: Out of the research database, it is now possible to summarise three major perspectives on measurement by Assessment Centres (AC’s): ▪ The dimension-based perspective: ACs measure constructs (dimensions) that can be meaningfully summarised across several exercises. ▪ The task-based perspective: ACs measure role behaviours contextualised within each of several exercises. ▪ The mixed-model perspective: Elements of both dimensions and exercise-specific role behaviours are represented in ACs.
generation z
generation y