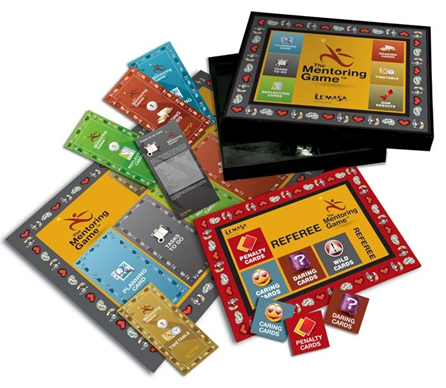 What is the Mentoring Game™?

The Mentoring Game™ is a board game played by Mentor-Mentee teams. The purpose of the game is to facilitate bonding between Mentors and Mentees.

Why the Mentoring Game™?

There are many reasons why mentoring programmes fail. One reason could be failure to properly establish the relationship between the two parties. The mere assumption that two people could become mentor and mentee does not ensure that they will succeed in working towards achieving a common mentoring goal. Furthermore, work pressure could lead to mentoring priorities being neglected.

The purpose of the Mentoring Game™ is to help to firmly establish the mentor-mentee relationship in order to enable it to withstand the pressures of normal business.

What is the theoretical basis of the Mentoring Game™?

The Mentoring Game™ is based on Discovery Learning. Discovery Learning is an inquiry-based, constructivist learning theory about what takes place in problem-solving situations. The learner draws on personal experience and existing knowledge to discover facts, relationships and new truths to be learned.

During Discovery Learning learners explore and manipulate objects, wrestle with questions and controversies, and conduct experiments. Learners are more likely to remember concepts and knowledge that they have discovered on their own.

Discovery Learning has many advantages, including:

What does the Mentoring Game™ entail?

The Mentoring Game™ involves the Mentor - Mentee teams that compete against each other during a workshop day. The game entails nine tasks that each team has to complete within a given time.

If they deliver late, a Penalty Card is issued. Penalty Cards are also issued when teams disobey game rules.

During the day, each team can choose either Caring Cards or Daring Cards. Teams can earn additional points by successfully completing the tasks on the Caring and Daring Cards.

Wild Cards are issued at random during the day, and the teams then have to deal with unexpected tasks.

Mini-lectures assist the teams with completing the tasks. The topics covered by the mini-lectures are People Skills; Trust; and Conflict and Confrontation.

There are also Reading Cards containing theoretical information on topics such as People Skills; Mentor – Mentee Roles; and What could go wrong in the Mentorship Programme?

The team that has the highest score at the end of the day receives the winners' trophy.

What does each Mentor – Mentee team take away from playing the Mentoring Game™?

Apart from strengthened relationships, each team takes away a wooden box that contains their
Reading Cards, as well as the completed Task Cards and their Mentoring Plan (project plan).

How many people play the Mentoring Game™?

The Mentoring Game™ can be played by a minimum of three and a maximum of six Mentor – Mentee teams. A Referee oversees the game.

What is included when you purchase the Mentoring Game™?

A Game Box that includes:

A Referee Kit that includes:

•   Everything that the Referee needs to enable the game to be played, including a Mentoring
Game™ Manual

A Refresher Kit that includes:

Many organisations implement formal mentoring programmes in an attempt to address challenges such as theengagement and retention of employees, the acceleration of learning and the building of succession pools. Mentoring is therefore an important part of their learning and development offering to employees.

However, even though we might all be aware of the possible advantages that a mentoring programme offers to an organisation and to individuals, we often struggle to establish and maintain an effective formal mentoring programme. How can this problem be overcome?

An important element of the mentoring programme is the relationship between mentor and mentee. Most mentor-
mentee relationships require a clear sense of purpose and a defined goal, which the mentee wishes to achieve. The clearer that goal is, the more focused later discussions will be and the easier it will become to relate day-to-
day issues to the larger goal (Clutterbuck Associates, 2002).

Furthermore, communication preferences, problem-solving methods, trust and conflict resolution, and time management are all aspects that need to be clarified within any relationship, and therefore also in a mentor-mentee relationship. All these aspects should be addressed during the contracting and bonding stage of the relationship.

What is the contracting and bonding stage?

Judy McKimm, Carol Jollie and Mark Hatter (2003) state that 'the contracting stage is the first stage in the mentor-mentee relationship, which is about creating an alliance, and consists of preparing for the relationship, forming and agreeing a contract to enhance preparation and constitute the agenda for the meetings'.

1.2 Ways to Achieve Contracting and Bonding

Another alternative is for mentors and mentees to attend lectures about the various aspects that should be addressed during the contracting and bonding stage and to afterwards implement the knowledge they have gained in their relationship. However, merely listening to a lecture does not mean that learning will automatically take place and that these important aspects will be sufficiently addressed.

Experiential techniques can be used in a mentor-mentee relationship

In the past, experiential learning techniques were used to ensure that these aspects are sufficiently addressed during the mentor-mentee relationship. Mentors and their mentees attended a one-day workshop during which some theory was shared and then immediately applied in their relationships. About two weeks after this workshop, the mentors and their mentees attended a day-and-a-half outward-bound experiential learning experience. During this outdoor experience, each mentor-mentee team had to solve various problems or face various challenges. The learning that took place during these experiences was then consolidated and positioned into the mentor-mentee relationship. The combination of the one-day, indoor workshop and the day-and-a-half outdoor experiential experience was very effective in establishing the contract and bond between mentors and mentees.

However, this two-and-a half day experience was expensive! Apart from the direct costs involved in accommodating the outdoor experience, the mentors were people who held senior positions in their organisations and their absence from the office created problems.

An alternative had to be found.

A solution had to be found that delivered similar results, but did so in a more cost- and time-effective way, and so The Mentoring Game was born!

The Mentoring Game, which was designed as a cost- and time-effective solution, is based on experiential learning (which is part of accelerated learning) and the principles of gamification. 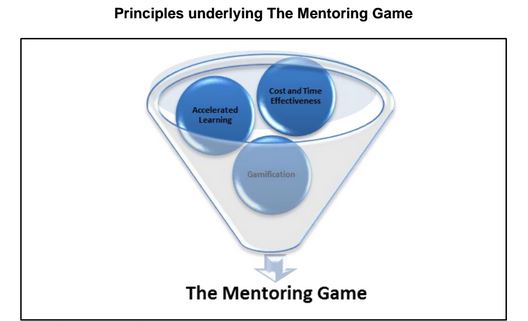 •    Learning comes from doing the work.

The SAVI approach to learning incorporates the principles of accelerated learning:

In designing The Mentoring Game, the SAVI approach was adhered to in the following way:

1. Somatic – Most of the tasks in The Mentoring Game can only be completed by moving and doing. Each completed task must also be delivered, on time, to the Game Referee. The team members are therefore constantly moving, never sitting passively in their chairs.

2. Auditory – To solve the problems and challenges posed by the various tasks in The Mentoring Game, team members need to continuously talk and listen to each other.

3. Visual – The Mentoring Game is very visual and certain tasks require direct observation and picturing. The three mini-lectures (PowerPoint presentations with voice-overs) are also very visual. The result obtained for each task is displayed on the scoreboard.

4. Intellectual – Each challenge needs to be resolved through problem solving. Reflection takes place once each task has been completed and the corresponding Reflection Card has been filled in.

Gamification was used to combine the varied activities that make up The Mentoring Game.

Gamification is the process of implementing game thinking and game mechanics into business settings (Zichermann & Linder, 2013). Gamification is based on game design, loyalty programmes and behavioural economics. Great gamification experiences cultivate a sense of mastery and progression to mastery. Mastery is the acquisition of knowledge and skills, and the ability to demonstrate control in a steady and consistent progression (continuous improvement).

The game design principles were incorporated into The Mentoring Game as follows:

Basic game elements that were incorporated in The Mentoring Game are:

Players have a positive experience as their brains release dopamine while they play the game. This motivates them to continue playing, and 'positive emotions improve learning' (Russel, 1999:5). 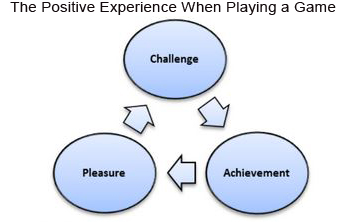 The Mentoring Game has been designed so as to ensure that each mentor-mentee team will collaborate effectively from the start of the game day to solve problems. In wrestling with challenges, the teams (each consisting of a mentor and a mentee) have to draw on their own experiences and existing knowledge to discover facts, relationships and new truths to be learned. Each challenge/problem (task) addresses one of the important issues that need to be addressed during the contracting and bonding stage of the mentoring programme. After each challenge (task), the team has to complete a Reflection Card, which requires them to reflect on what they have discovered and how their new knowledge and skills could possibly be put to use in their mentoring programme.

Points are awarded for the completion of each of nine tasks, as well as optional tasks if the teams feel up to additional challenges.

The team that has accumulated the highest score at the end of the day is declared the winners and receive the winners' trophy.

Apart from strengthened relationships, each team takes away a wooden box that contains their Reading Cards (theory, previously provided in the form of a learner's manual), Reflection Cards (previously incorporated in the learner's manual) and their mentoring plan (clearly indicating their purpose and goal, and how it can be achieved).

While participants make comments like 'I did not realise how the time flew past'; 'This was fun, when can we come back?'; and 'This was really valuable in establishing our relationship. Thank you', the finance director just smiles, because the total cost to the company in terms of time and money was far less than that of an experiential learning experience offered over two and a half days!